The Human Body, according to Yoga, is composed of various layers of subtle and gross bodies, or energies. Each layer or body helps to support and develop the next. The principles of Ayurveda and the concept of the Human Body according to Yoga philosophy are intrinsically linked to each other in this aspect, and therefore, they are identified as ’sister sciences’. Their ultimate purpose is similar – to attain to the state of Yoga. 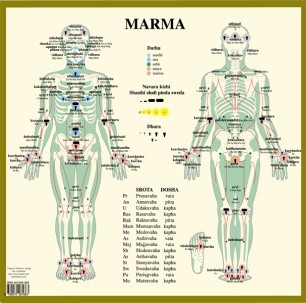 The primary conveyor of life, health and vitality throughout the various levels and layers of human development, be it physical, mental or spiritual, is Prana.  Prana is Life – the lack of which is Death.

When Prana flows freely throughout the various layers, levels, and bodies, etc., undisturbed and unblocked, ultimate health, vitality and longevity is experienced.  This state can never be fully attained in this life as we are all born with a Dosha (disturbed state at birth termed ‘Prakriti’).  However, we have a duty and responsibility towards ourselves to keep our body and mind as stable, strong and as well as we can.  This aspect of Lifestyle management comes under Ayurveda as well as Hatha Yoga.

The primary source of this idea of intrinsic interconnectedness comes from numerous sources of the Hindu shastras (scriptures), namely, the Yoga Darshans, Ayurvedic texts such as the Charaka and Sushrutha Samhitas, Thirumular’s Thirumanthiram, Patanjali’s Yoga Sutras and many more.

Dis-ease and injuries to the body and mind are immediately related as one affects the other. Thereafter, the effect will be transferred to the organs or tissues directly connected to the part injured or dis-eased.

From a classical viewpoint any such injury creates a disturbance to the free flow of Prana and from there we may experience discomfort, pain, disease and even death. The first matter to understand is to determine how badly the flow of Prana to that area is affected. It is the flow of Prana – or the lack of it – that decides the depth or intensity of the problem. The flow of Prana through the seven Dhatus (tissues), the three Dosha (constitutional disturbances), and the various bodies from gross to subtle can all be detected by the diagnostic tool that is known as ‘Naadi Parikshai’; pulse reading or testing.

Modern medical systems tend to first investigate the organs and tissues directly related to the problem and recommend drugs to remove symptoms. However, by removing the symptoms of a dis-ease, the root-cause of the dis-ease may not be eliminated or understood.

Similarly, if there is an accident or fall, various muscles, tissues, and other fascia, etc., can become affected. Again, working directly on these affected areas with physiotherapy or even using various Yoga postures to manipulate the injured parts, appears to be a modern-day introduction. But the purpose behind these techniques was always to improve and restore the free flow of Prana. 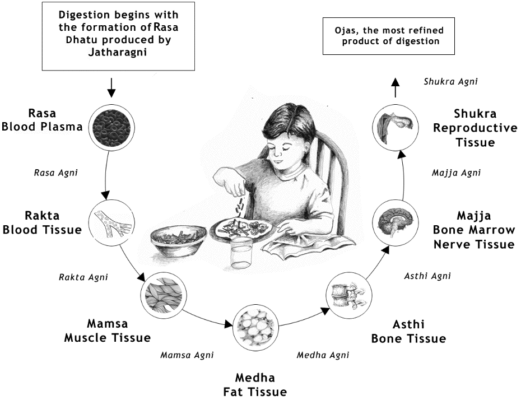 The approach of the Ancients was to first seek correction and restoration of the body and mind, and then, progressively, to attain to the state of Yoga.

We are planning a training program to re-introduce the missing aspect of Ayurveda / Yoga Anatomy & Physiology to its rightful place. Please let us know if you are interested in learning more.

Please email us on info@ancientsbest.co.nz to express interest or to find out more.